The whole purpose of adoption queuing system in web applications is to prevent delays that users experience. Delays occur while waiting for the result when sending emails, processing images (resizing, cropping etc), handling CSV files, creating PDF files so on after a short HTTP request made by users. A busy website cannot handle all these processes in real time because it takes time and requires a lot of memory so they have to be queued and done later on one by one with a messaging system like RabbitMQ. In this post, we're going to focus on RabbitMQ. For more information, visit RabbitMQ site and make sure to read AMQP Model.

RabbitMQ is a message broker that receives messages from producers and passes them to consumers. Right in the middle, it can route and store messages based on the given rules by developer.

Example case: Assume that there are 5 Producers, 5 Queues and 5 Consumers in our system. We want to resize an image. P1 sends the message to E. E passes the message to Q1. C1 catches message and resizes it. Why always C1? It is because Exchange has a binding rule set by you, that's why! If the rules were set differently, all the other consumers could get messages as well. 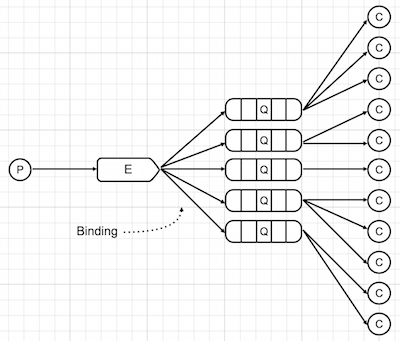 The main idea of the messaging model in RabbitMQ is that the producer shouldn't send messages directly to a queue. Instead, it should send messages to an exchange and then they get delivered to specific queues based on user defined rules.

Queues are used to prevent running resource-heavy tasks as soon as a HTTP request comes in and wait for the response. Instead of this basic logic, we do things later so the request is turned into a message and passed on to a queue to be stored. After that the consumer consumes messages in the queues to finish off the work. As simple as that!

In short terms, it means parallelising the work in between consumers. If you run many consumers for a specific work in the background, on average every consumer will get the same number of messages. This is a default behaviour of RabbitMQ.

For any random reason, a consumer could die in the middle of a process and we would lose all the messages delivered to this particular consumer which is a very scary scenario. In such case, what we would want is to deliver unfinished and all the messages to any other available consumer instead.

Note on message persistence: It tells RabbitMQ to save the message on the disk however there are some very rare cases where the message is accepted by RabbitMQ but not saved on the disk yet so this scenario doesn't fully guarantee that a message won't be lost. If you want a 100% guaranteed option, use publisher confirms (Publisher Acknowledgements).

We know that the round-robin dispatching feature dispatches messages to consumers evenly so each consumers get average same amount of messages to process. Lets think about this scenario - there are 5 messages and 2 consumers. Consumer 1 will get message 1, 3 and 5 on the other hand consumer 2 will get message 2 and 4. Lucky enough messages 1, 3 and 5 require very light work to be done whereas messages 2 and 4 require very heavy work to be done so you should feel sorry for consumer 2.

To prevent this behaviour, we need to tell RabbitMQ not to give more than one message to a consumer at a time so what that means is, don't dispatch a new message to a consumer until it has processed and acknowledged the previous one. It is done by using basic_qos() method with prefetch_count = 1 setting.

In the case of work queues, each messages are delivered to a single consumer. Delivering a message to multiple consumers is known as "publish/subscribe".

Exchange sits in between producers and queues so it receives messages from producers and pushes them to specific queues based on user defined rules. The rules are defined by the exchange type. Messages are either pushed to a single queue or many queues or discarded. In short terms, exchange will do what you tell it to do with the messages.

There are four exchange types which are direct, topic, headers and fanout.

It delivers all messages to all queues it knows so there is no filtering or differentiation is going on here. It just delivers messages randomly and you have no control over in which queue messages will go. Messages are pushed to the queue with the name specified by routing_key only If it is defined by user, however it doesn't apply to fanout exchange.

Binding is a relationship in between exchange and queue. Exchange follows the binding rule to pass given message to correct queue. This method normally accepts binding_key but it doesn't apply to fanout exchange type.

Routing uses binding keys to filter and pass specific messages to correct queues from exchanges but it doesn't apply to fanout type. The binding key is the third argument in queue_bind method.

Messages are sent to the queues whose "binding key" matches the "routing key" of the message. It gives you change to select which message will go to which queue. If neither of routing_key and binding_key are set, direct exchange will behave like fanout and send the messages to all the queues it knows.

We can use same binding key to pass messages from one exchange to multiple queues. As you can see below, messages with jpg routing keys go to Q1 and Q2.

It is similar to direct exchange so a messages are sent to the queues whose "binding key" matches the "routing key" of the message. The difference in between these exchanges is, the binding keys in topic exchange must be a list of words which are delimited by dots and they can contain * and # signs. Star means exactly one word. Hash means zero or more words. The limit of the binding key has a limit of 255 bytes. Example: create.pdf, delete.csv, uefa.europa.league, *.europa.*, champion.# so on.

Based on the binding keys shown above, this is what happens:

Remote procedure call (RPC) is used when you need a response after whole messaging process. To be able to receive a response from the server, the client must send a "callback queue" address as part of request. We would need to use reply_to (used to name a callback queue) and correlation_id (used to correlate RPC responses with requests) message properties in RPC calls.

This is how RPC call works: